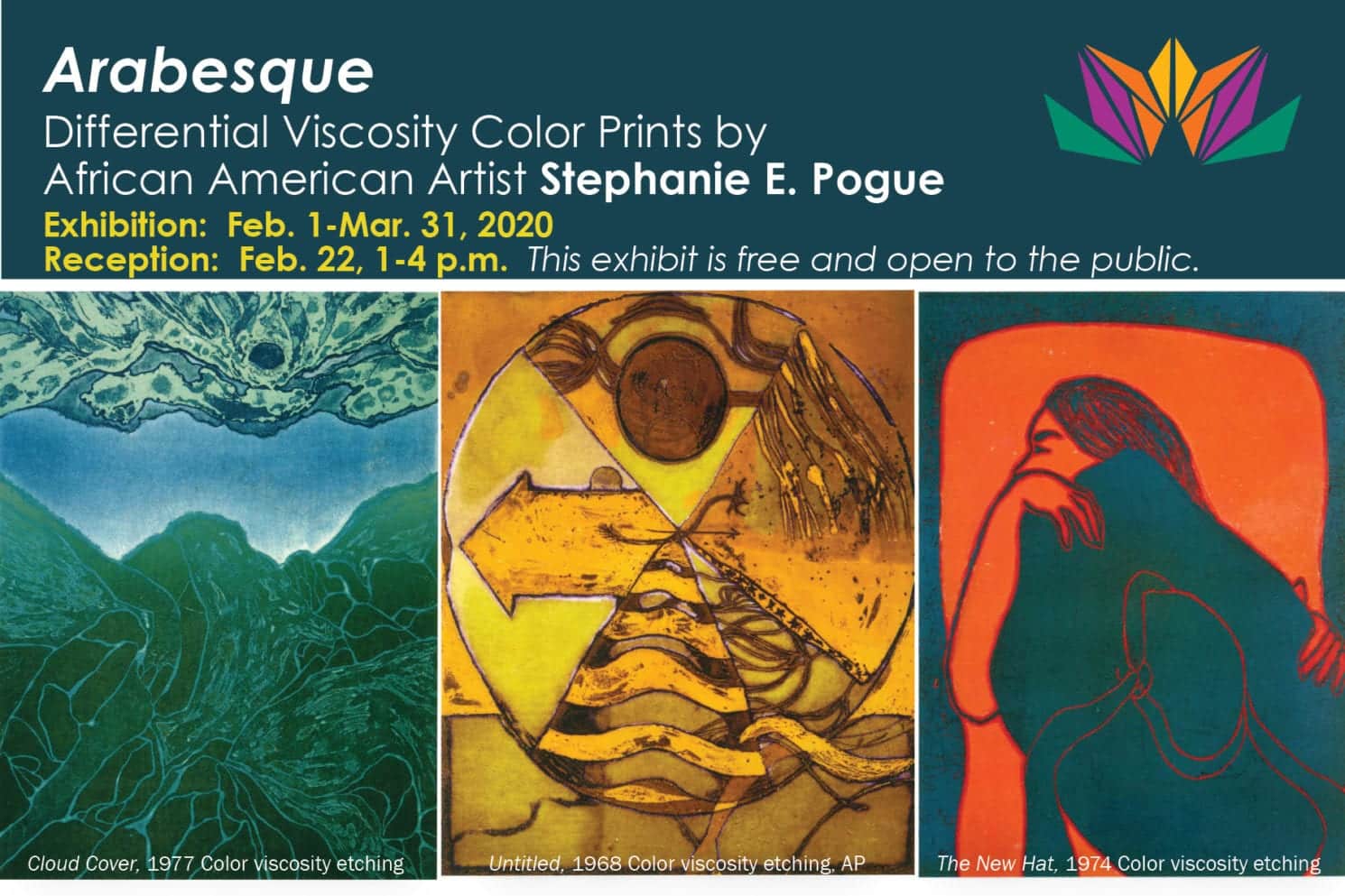 The Friends of the Frankfort Library are pleased to announce the upcoming exhibit in the Anna & Harlan Hubbard Gallery will be Arabesque, featuring Differential Viscosity Color Prints by African American Artist Stephanie E. Pogue. This exhibit is free and open to the public during regular library hours February 1–March 31, 2020.  A public reception hosted by the Friends of the Library is scheduled for Saturday, February 22, 1–4 p.m. in the gallery.  Light refreshments will be served.  Artwork will be available for purchase. A portion of each purchase goes to the Friends of the Frankfort Library who in turn sponsor arts and children’s programs at the library including Clinton County Youth Theatre and the Annual Concert Series.

“We are so excited to share work from Ms. Pogue’s artistic career in the Hubbard Gallery during Black History Month and also Women’s History Month. She is our featured artist for the 4th Annual Women’s Expo, which takes place March 14, 10 a.m.–4 p.m. Latinx self-proclaimed “Artivist” Beatriz Vasquez will also be featured alongside Pogue in March and at The Expo. Beatriz specializes in traditional Mexican “papel picado” or cut paper.” – Susie Blackmore, FCPL Marketing & Art Manager

Stephanie E. Pogue (1944-2002) was a painter, printmaker (specializing in differential viscosity printmaking), and professor. She attended Syracuse University for one year, and then transferred to Howard University in D.C. where she finished her 3 remaining years of undergraduate studies. She attended the School of Fine Arts and majored in painting.  Ms. Pogue then attended Cranbrook Academy of Art in Michigan, where she earned her Masters of Fine Arts Degree in printmaking.  Following graduation, she joined the faculty at Fisk University, Nashville, Tennessee, under the tutelage of David C. Driskell, who had been one of her professors during her time at Howard.  She subsequently followed Dr. Driskell to the University of Maryland, where she joined the Art Department faculty, eventually taking her turn as Chairman of the Department.  “My content embraces quiet moments, the beauty to be found in small as well as large things, the excitement of a stormy sea: in short, interpretations of that which has touched me.” -Stephanie E. Pogue, 1990

“Pogue’s career intersected with some of the most important movements in the history of 20th century American Art. The Black Arts Movement, the Feminist Movement, and Post-Modernism are a few of the artistic currents that framed Pogue’s career and that are at times embodied in her work.” -Dr. Adrienne L. Childs.

Thank you to our generous sponsors: Peggy & Wayne Williams, 51 West event center, and the Friends of the Frankfort Library.  Also thank you to Robert Pogue and Dr. and Mrs. William Pogue, for making this exhibit possible.

Images are used with permission of the David C. Driskell Center at the University of Maryland, College Park, MD 20742.