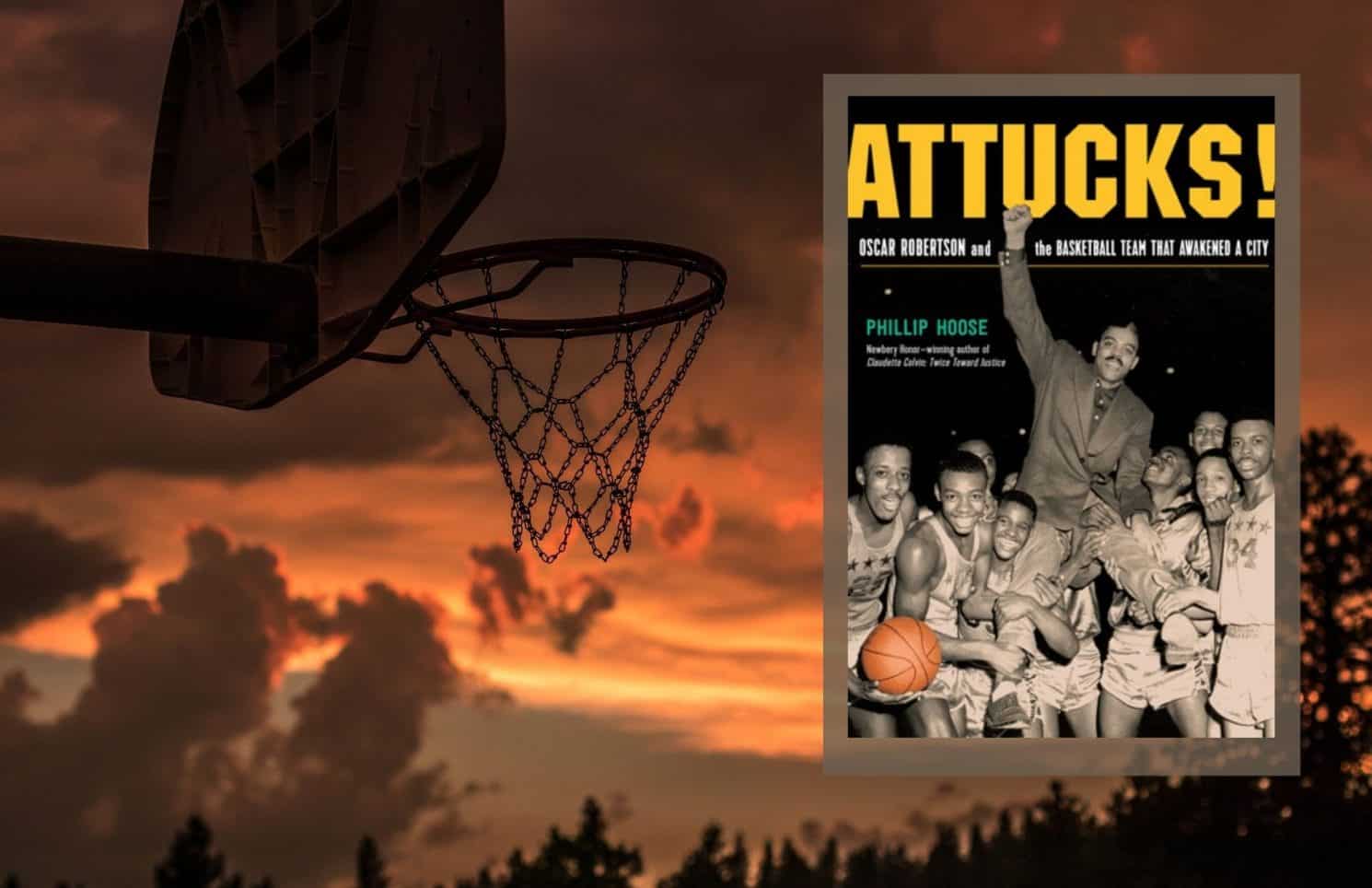 Basketball is a legacy most Hoosiers hold with pride. A quick Google search leads to several articles about “Hoosier Hysteria”, articles on some of the most legendary teams, and the history of the tournament in general. Basketball may not have been originally invented in Indiana (it was Massachuetts), but, arguably, the love of basketball was invented in Indiana. Most communities in Indiana boast stories of their best basketball teams of the past. Especially the teams that won the State Tournament, Indiana’s highest honor. Our own community claims several local basketball legends!

“A newspaper cartoon captures the annual burst of hysteria among Hoosiers over the State tourney” (p. 72).

Author Philip Hoose is a Hoosier and National Book Award Winner. He recognized a need for the story of Crispus Attucks’s 1955 team, lead by the legendary Oscar Robertson and a talented coach. They were the “first all black team in U.S. history to win racially opened championship tournament an integration faced with their on-court prowess” (Goodreads). Surely, this is much more than a story of basketball.

There is an especially enlightening fact revealed in the “Author’s Note” from his personal interview with Oscar Robertson. Hoose writes, “You know,’ Oscar said, ‘when the Ku Klux Klan started our school, they really didn’t understand what they were doing” (p. 3). In fact, the school that integrated Indianapolis was opened by Ku Klux Klan members in an effort to keep their white children separated from the Black youth. As Oscar continued, “The city of Indianapolis integrated because we were winning. All the Black guys, all the really great players, went to Attucks. We were winning all those games, and coaches didn’t like it” (p. 3). Imagine that, in Indiana Basketball was powerful enough to wake a city.

Hoose tracks Hoosier history, beginning with The Great Migration of African-Americans moving North to find safer homes and better jobs. He details the power held by the KKK in Indiana’s past. Additionally, he details the growth of Hoosier Hysteria. Hoose explains that while small towns could not afford football teams, basketball teams required less expensive equipment which led many schools to begin programs. The attraction expanded quickly after the first State Tournament held in 1911 in Bloomington, Indiana. Hoose describes the craze, “Communities built gyms that seated several times the school’s enrollment- sometimes even more than the town’s entire population” and “Little towns spent public funds earmarked for road repair and bridge construction to build outsized gyms instead” (p.  34)

Also, described by Hoose is the magic from Crispus Attucks. The intentional, talented, and challenging Coach Ray Crowe along with a hardworking team lead by the Robertson brothers, specifically the remarkably talented Oscar Robertson. Of course the ability for the awakening was also the result of Dr. Lane, Attucks Princpal, who systematically worked to develop talented and respectable teams that would showcase pride of their school and race. In fact, Hoose states that it took 15 years of advocating for “outcast schools” (p. 44) to be able to play in the state tourney.

Attucks! is a remarkable book that illustrates a time when hopeful ideals helped change a city peacefully via a hardworking basketball team and their school leaders. Hoose quotes historian Randy Roberts, reflecting the correlating news stories of the Montgomery Alabama bus boycott and the Attucks teams, “The main stories in Montgomery and Indianapolis were part of the same long, progressive struggle for justice and advancement. There may have been some corner of Indiana where basketball was just basketball, but that corner was not the west side of Indianapolis” (p. 155).

“Oscar Robertson and Ray Crowe examine the Indianapolis News Basketball Record Book, much of which they had just rewritten” (p. 154).

“Attucks! doesn’t pretend that we’ve outlived the racism of the American past, all the while showing readers how being grouped in one’s self-worth and committed to the pursuit of excellence can have a lasting impact on a community” (Kirkus Reviews)

“The story of triumph covers personalities as well as history: Oscar Roberston, the NBA basketball great, was the centerpiece of a team led by Ray Crowe, a remarkable coach. Their backgrounds and what from them are woven into the exciting description of games…Excessively readable, this should apple to sports fans and those looking for a good book about the civil rights era. Exemplary notes and sources will push readers- adults included- to learn even more” (Booklist, starred review, www.philliphoose.com).

Attucks! is part of the young adult library collection at Frankfort Community Public Library. It is a book that would interest readers of all ages! Be sure to check it out or place a hold today!

“Attucks!: Oscar Robertson and the basketball team that awakened a city”. (2018).

Hoose, P. (2018). Attucks!: Oscar Roberston and the basketball team that