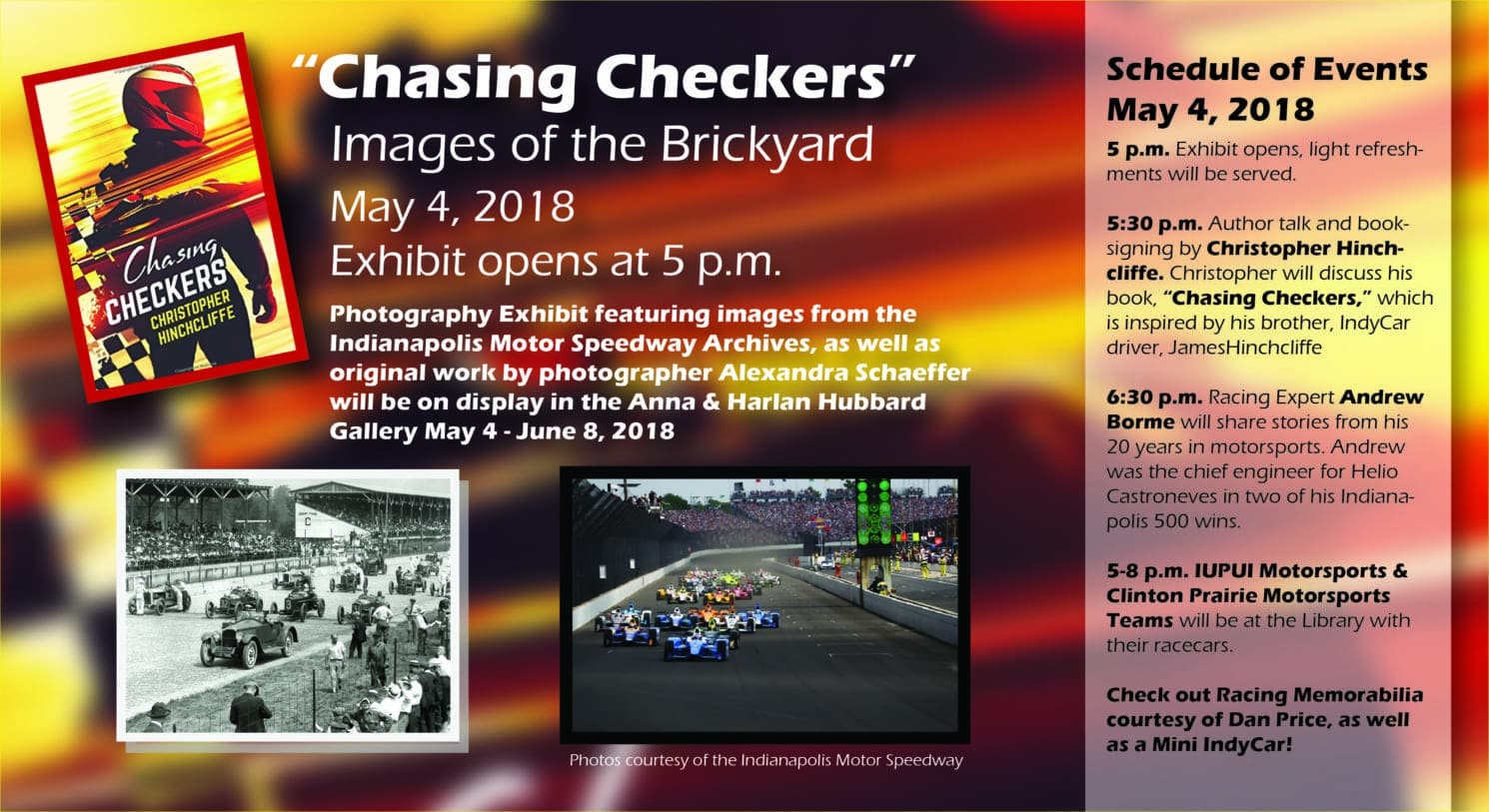 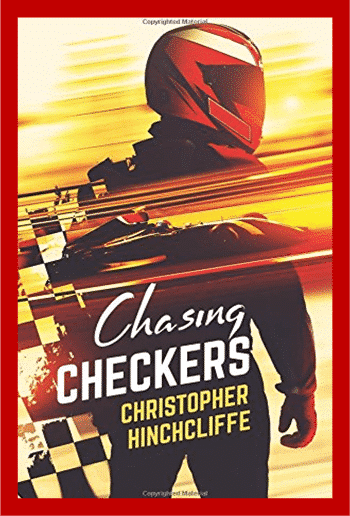 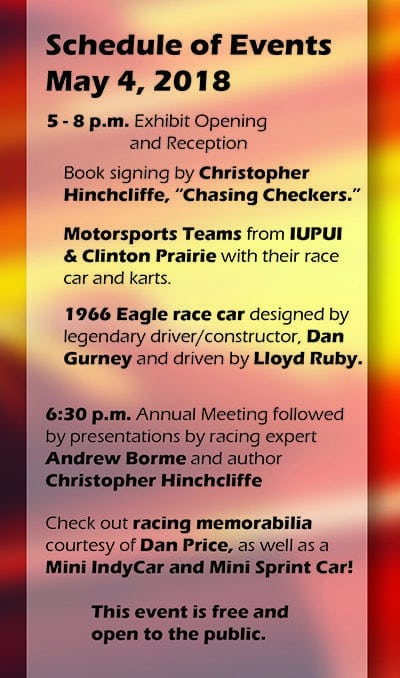 The Greatest Spectacle in Racing is coming to the Frankfort Community Public Library this May.  You are invited to the exhibit opening on May 4 from 5–8 p.m. Take a walk through history with images provided by the Indianapolis Motor Speedway Archives and racing photographs by Alexandra Shaeffer on display in the Anna & Harlan Hubbard Gallery. Talk to racing expert Andrew Borme and author Christopher Hinchcliffe, as well as motorsports team members from IUPUI and Clinton Prairie High School. A few race cars will be on display during the opening including, courtesy of the Indianapolis Motor Speedway Museum, a 1966 Bardahl Eagle race car designed by legendary driver and constructor Dan Gurney and driven by Lloyd Ruby.

Canadian author Christopher Hinchcliffe is our featured program, and will conduct a book signing and talk on Chasing Checkers. Inspired by his brother, IndyCar driver James Hinchcliffe, Chasing Checkers follows a driver’s story from his first go-kart race to the biggest race of his life.  Along the way, he discovers secrets about his past that force him to question his destiny and face the ultimate question, “Is it all worth it?” Copies will be available for purchase or checkout.

Racing consultant Andrew Borme will discuss his twenty five years of motorsports engineering experience in the Skanta Theatre at 6:45 p.m.  Andrew was the chief engineer for Helio Castroneves during two of his Indianapolis 500 wins.  He also worked with drivers Tomas Enge, Scott Goodyear, and Scott Sharp, to name a few.  In 2009, Andrew joined IUPUI’s faculty and is currently the Director of the Motorsports Engineering program.  He brings a wealth of knowledge to the program from working with major race teams all over the world.

Additionally, motorsports teams from IUPUI and Clinton Prairie High School will be here with their cars to answer questions about their programs and experiences at different levels of competition. IUPUI was the first university in the United States to offer a Bachelor’s degree in Motorsports Engineering.  The program is designed to prepare graduates for careers in the motorsports industry as well as automotive-related fields.  IUPUI Motorsports has achieved much success in competition throughout the country.  Clinton Prairie High School’s newly formed program includes securing sponsorships, turning wrenches, and racing.  In May 2017, they competed and won the evGrandPrix which is hosted by Purdue University and the World Karting Association. Clinton Prairie Motorsports now holds the title of Top High School Electric Go-karting Team in Indiana.

Dan Price will have racing memorabilia on display in the Hubbard Gallery through June 8.  Mr. Price is well-known in the United States Auto Club (USAC) racing world, and has accumulated racing items through the years. The exhibit will also include photographs from Alexandra Shaeffer, Photojournalism and Marketing student at Ball State University. Ms. Shaeffer hopes to work in the professional sports field and the IndyCar Series.  Photos provided by the IMS Archives and Alexandra Shaeffer will be on display and available to purchase May 4 through June 8.  Start your engines, Race Fans!  The month of May is going to be exciting!