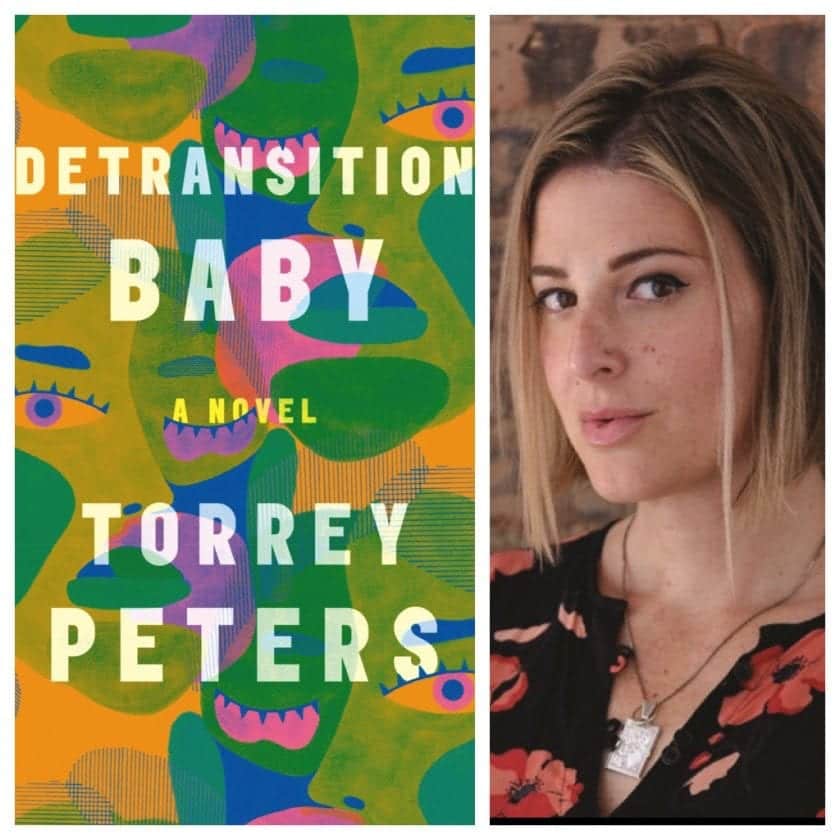 Torrey Peters used the film Tangerine directed by Sean Baker as a source of inspiration for her recent novel Detransition, Baby. The movie won praise and notoriety in 2015 partly because it was entirely shot on an iPhone 5. It also happens to star two trans women portrayed by actual trans women.

Torrey Peters is the author of the novellas Infect Your Friends and Loved Ones and The Masker, which are available for free on her website. She holds an MFA from the University of Iowa and an MA in Comparative Literature from Dartmouth. She grew up in Chicago and now splits her time between Brooklyn and an off-the-grid cabin in Vermont.  This cabin had been abandoned for 12 years when she discovered it, had one room, and no water or electricity. That means no internet.

Lots of media giants have reviewed her books, including the New Yorker, The New York Times, LA Times, Boston Globe, and NPR, just to name a few. Entertainment Weekly said about Detransition, Baby: “A tale of love, loss, and self-discovery as singular as it is universal, and all the sweeter for it.” Time magazine called it “a tender and bold exploration of gender, parenthood and love.”

I recently finished this book and am recommending it to you. It has messy characters and an ending that isn’t tied in a nice little bow. It is about navigating identity, commitment, parenthood, and divorce. The novel focuses on three main characters: Reese, a trans woman, Katrina, a divorced cisgender woman, and Ames, formerly known as Amy, a man who has detransitioned.

Reese and Amy date each other as trans women. Reese wants nothing more than to be a mother. Amy and Reese attend a meeting about adoption, but the meeting becomes too much for Reese, and she leaves. Their relationship starts to get complicated, and they break up. The book moves between past to present throughout, and this breakup is part of the past.

In the present Amy has detransitioned to Ames and is having an affair with his boss Katrina. Ames has always thought he was sterile but is surprised when Katrina reveals that she is pregnant.  Ames can’t imagine himself as a father. He reaches out to Reese with a crazy idea to bring her into the picture to raise the baby as the child’s other mother, creating an unusual family unit.

I think she doesn’t mean that this book is only for trans people to read; she means she isn’t going to slow down her writing to explain every term, every joke. It’s the reader’s job to figure it out — that’s why there is Google.  I definitely used Google for some things while reading this, and I didn’t mind. Torrey references Toni Morrison a couple times in her interviews.

One thing that has been asked pretty regularly in her interviews regards writing about detransitioning, and whether it was it hard to write about such a taboo subject. In the Kirkus Review interview she had the following to say: “The real reason most people detransition that I’ve known isn’t because they were wrong about having transitioned. It’s because life is hard as a trans woman, and it’s an escape. And writing about detransition is like putting that escape on the table.”

Torrey Peters dedicates her books to divorced cis women.  She read books about divorced women for research in writing this book. She talks about how divorce is a transition story, though not all divorces — the ones where the divorce feels a total reframing of a life.

This book may be different from anything you have read before, but to me that doesn’t mean you shouldn’t give it a try. Emily VanDerWerf from Vox magazine says, “ If you are a cis person seeking to empathize with trans women, this book wouldn’t be a bad place to start.”

This book is available to check out at the Frankfort Library with your library card.