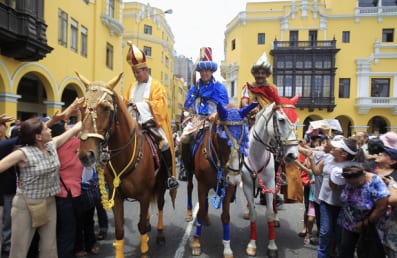 St. Nicholas Day, feast day (December 6) of St. Nicholas, the 4th-century bishop of Myra. St. Nicholas is the patron saint of Russia and Greece, of a number of cities, and of sailors and children, among many other groups, and was noted for his generosity. St. Nicholas Day is still commonly celebrated across Europe on December 6th, though the traditions vary depending on the country

St. Nicholas Day is celebrated on December 5th in the Netherlands, where St. Nick, or Sinterklaas, catches a steamboat from Spain. In preparation, kids leave traditional clogs (or just their regular shoes) by the fireplace or door. (Think of it as the equivalent of hanging stockings over the fireplace.) The shoes are filled with hay or carrots for Sinterklaas’ white horse, in the hopes that small gifts will replace this offering.

Winter Solstice is an ancient tradition — possibly dating as far back as the Stone Age — that observes the shortest day of the year. This occurs a few days before Christmas, and even though it’s celebrated in different forms everywhere from Sweden to Iran, England’s Stonehenge is thought to be one of the earliest epicenters for marking the longest night of the year due to the placement of the stones. In fact, the Winter Solstice is still celebrated at Stonehenge, and anyone can buy tickets to experience the sunrise.

The earliest mention of Christmas markets can be traced to medieval Germany, although they likely appeared vastly different from today’s sprawling affairs that often feature ice skating rinks and towering Christmas trees. Dresden holds the honor of being the oldest, and its main one, Striezelmarkt, offers dozens of vendors, a carousel, Ferris wheel and puppet shows. Other famed markets can be found in Nuremberg, Munich and Stuttgart. And while excellent Christmas markets now exist around the world, there’s no place like the original.

On January 6, Three Kings’ Day is celebrated in much of the Spanish-speaking world, marking the occasion when three wise men visited the baby Jesus on the twelfth day of Christmas, bringing gifts of gold, frankincense and myrrh. In Spain, Dia de los Reyes, as it’s known, is all about massive parades and roscon de reyes, a sweet, ring-shaped pastry meant to resemble a king’s crown. The pastry traditionally contains a small plastic figure, granting the finder royal status for the day. The pastry also conceals a bean, burdening the finder with the task of buying next year’s cake.