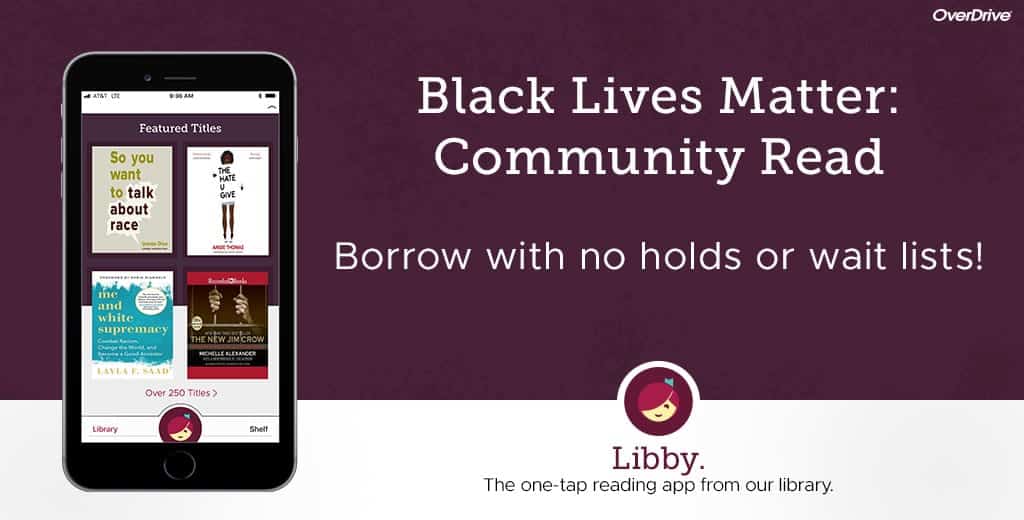 The news recently has been filled with protests and calls for justice. People, especially in the African American community are calling for racial justice in the United States. Most of us know about the Civil Rights movement of the 50s and 60s, but many may not be fully aware of the prejudices still faced by African Americans today.

To further the cause of social justice, Overdrive has started a new program called Black Lives Matter: Community Read. This program will allow select titles to be available to our users without a waitlist. The available titles will change as time goes on, so be sure to check out these books while they last!

The New Jim Crow: Mass Incarceration in the Age of Colorblindness by Michelle Alexander

Named one of the Most Influential Books of the Last 20 Years by the Chronicle of Higher Education and winner of the NAACP Image Award for Nonfiction, Alexander’s critically acclaimed book examines racial disparities through the lens of mass incarceration.

The Hate U Give by Angie Thomas

Ebook and audiobook simultaneous use

This bestselling young adult novel follows Starr, a Black teenager caught between the poor neighborhood where she lives and the fancy suburban prep school she attends. The uneasy balance between these two worlds is shattered when Starr witnesses the fatal shooting of her unarmed best friend Khalil at the hands of a police officer.

Me and White Supremacy: Combat Racism, Change the World, and Become a Good Ancestor by Layla F Saad

This New York Times bestseller published in January 2020 is based on the viral #meandwhitesupremacy Instagram challenge and provides a framework for readers to dismantle the privilege within themselves.

So You Want to Talk About Race by Ijemoa Oluo

Ijeoma Oluo guides readers of all races through subjects ranging from intersectionality and affirmative action to “model minorities” in an attempt to make the seemingly impossible possible: honest conversations about race and racism, and how they exist in almost every aspect of American life.